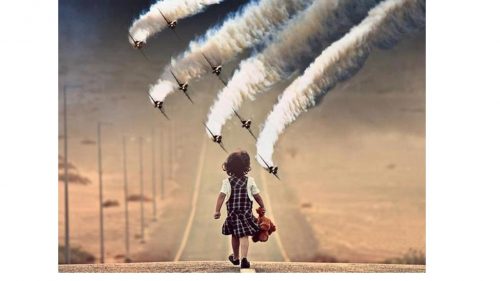 What do the following have in common: Soldiers who fought against each other in WWI,Civilians of bomb attacks in WWII or American soldiers stationed in Vietnam, Iraq and Afghanistan? They were all experiencing very traumatic events which left lifelong gruesome images in their heads. Many of them were lucky and survived the terror. But their memories of it never left them. For a long time, it was thought that the traumas faded over time. But now psychologists are certain. These memories are still present in the subconscious mind and can stress the psychological stability for their whole lives. Moreover, these memories can alter the genetic make-up and may even influence the suffering of children and grandchildren. Sufferers are called war children.

Although these later generations have been living in a safe and harmonious environment, they are often confronted with “unexplainable” strange behaviors. The list of potential behaviors is endless. Depression, anxiety, obsessive thoughts, panic disorders, self-harm, chronic pain, strange relationship to money, eating disorders, or enigmatic feelings of guilt.

People who experience terror pass it on to their descendants

Studies show that three-quarters of today’s over 70-year-olds in Europe have traumatic experiences from the war and the post-war period. Traumatized by bombs, sexual assault, homelessness, fugitive, hunger, captivity, and death. Most of them were perpetrators and victims with all feelings of guilt and pain. Many victims do not want to talk about their experiences in order to forget.

What can ‘war children’ and ‘war grandchildren’ do to avoid leaving scars behind for the next generation?

It is important to talk about their own destiny. You must learn to show more compassion to yourself and subsequently to your children. It is never too late to do so. There are many different types of support available to deal with your and your ancestors traumatic experience. Group Therapy, Behavior Therapy, Cognitive Behavioral Therapy, Hypnotherapy, or Homeopathy are a few of many therapies available.